Our local library is closing down and this morning over my Oats So Simple, I became quite emotional talking about it with my husband and one of my sons. Despite protests nothing can prevent it happening and I could weep that the place where I’ve spent many happy hours browsing will no longer be part of my life. I have been a member of Litherland library since we moved here over forty years ago. It was there I first sought help with research from one of the librarians at the time, Jennifer Stanistreet. Over the years other librarians have taken her place but all have been willing to help me find the books or material I needed for my writing.


I have so many memories tied up in that library and it has even featured in one of my books LOOK FOR THE SILVER LINING. During the blitz a school in the area was bombed and so badly damaged, some of the classes were temporarily taken in the library for a while. Situated opposite the Richmond sausage factory with its famous pig on the wall carrying a porky sausage over its shoulder, the library was within walking distance, and not far from the lift bridge over the Leeds-Liverpool canal.


The factory and lift bridge have long gone but the library built in the Thirties and well placed to cater for the reading needs of the people of Seaforth and Litherland survived until now. It will be greatly missed when it finally closes on All Saints Day, 1st November 2013,when there will be a farewell party. 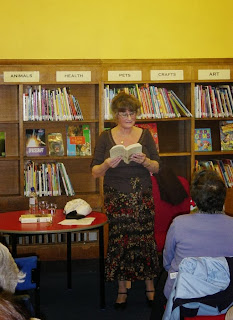 
It was Sheila Walsh, member of Southport Writers’ circle, writer of historical romantic fiction and president of the RNA, who told me to begin my research in the children’s section of the library. In the early days I would read well illustrated children’s books such as Living in a Castle during medieval times before borrowing some of the adult books mentioned in the bibliography at the back. There were several children’s books on WW2, as well as the likes of Growing up in the Twenties and Thirties and, of course, the Great War.
I’ll never forget coming across mention of HMS BLACK PRINCE which was sunk during the Battle of Jutland in 1916. It gave me quite a shock because Mam had told me that her cousin had gone down with the BLACK PRINCE, but reading of that terrible disaster really brought the tragedy home to me. She never said which cousin it was but told me that her mother had been heartbroken when her eldest nephew had been killed.
I remember feeling slightly depressed for months while researching the Great War, especially after perusing the letters sent from the Front and scanning the lists of soldiers, sailors and airmen in the LIVERPOOL ECHO who had been killed in action. It was Jenny Stanistreet who mentioned to me at the time that she was trying to trace her grandfather who had fought in the trenches and been at Ypres. So many did not return home to a land fit for heroes.