It was still to be some time before I was to discover where and when my ancestors arrived in Liverpool and from where they came. In the meantime the publishing industry was still undergoing changes. Publishers were amalgamating and amongst them was my paperback publisher.
Whenever companies amalgamate, you can bet your bottom dollar that people’s jobs will go. It happened not only to me but other authors, sales people and editors. Despite still having hardback, large print and audio publishers, it sapped my self-confidence as a writer to be dropped. Fortunately my hardback publisher had decided to enter the paperback market, so she was to publish the book, ANOTHER MAN’S CHILD in that format as well.
I had some help with my research for the book from my cousin, Patsy, the only daughter of my father’s elder sister, Agnes Christina Taylor/nee Nelson. Patsy lived in Burscough Bridge and I decided to set part of the story there, as well as on a barge on the Leeds-Liverpool canal and in Liverpool, as I live within minutes of that waterway and it played an integral part in Liverpool and Lancashire’s industrial history. 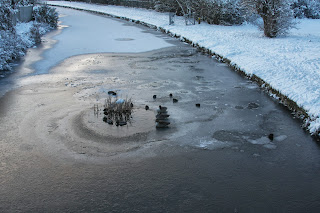 The book begins in 1909 and covers the Great War, as well as the General Transport strikes and riots in 1911, which included Liverpool’s own Bloody Sunday. It was a time when Royal Naval gunboats were anchored in the Mersey and troops of soldiers were despatched from outside Liverpool to help deal with what the Government considered a very dangerous situation. http://en.wikipedia.org/wiki/1911_Liverpool_general_transport_strike
My father, Stanley, was born 1st October 1910, so was just a baby at the time with two older brothers and two older sisters. Whilst writing the book, I never considered what it must have been like for my Nelson grandparents with five young children, living through such tumultuous times. How I wish I’d known them, especially my grandmother. Had she ever thought of becoming part of the Suffragette movement? Did she consider herself equal to her husband? What was it like for her on the home front during the Great War?

I remember being asked at a library talk,  ‘So do you ever put real people in your books?’
‘Nope!’ I replied. ‘At least not live ones. Too risky! And besides I wouldn’t be able to manipulate someone I knew, the way I can an imaginary person.’
I can almost hear some writers of fiction say, ‘Ha! My characters often do exactly what they want and not what I’ve planned for them.’ I know that’s true because it happened to me and I had to get rid of a character because I started getting fond of her and she threatened to spoil the satisfactory ending I had for my heroine in ANOTHER MAN’S CHILD.


I killed her off as follows: Excerpt from ‘Another Man’s Child’:  ‘Apparently there was a thunderstorm. The police said there’d been a lot of rain in the area round Shapfell. She lost control avoiding a motor lorry,’ said Nathan.
This was based on a real event that I read about in a Liverpool Echo of the time.


It was thanks to my cousin, Patsy, that I eventually was able to get my hands on a photo of my grandmother, Ada Florence Nelson, nee Cooke, born in 1876. I consider it a sad loss that I grew up never having known either of my real life grandmothers and had to make do with fictitious ones. 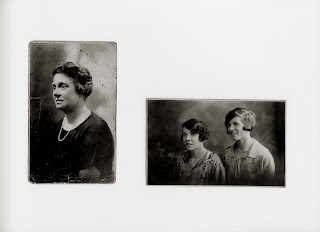 On the left are my grandmother, Ada Florence Nelson, and her daughters, my Aunt Florrie and Aunty Agnes in the early 1920s. I don't remember Florrie at all but I have fond memories of Agnes and the sweet tin she kept in her sideboard.
I had long known what my grandfather Nelson looked like because there was a photo of him and my Uncle Jim in our parlour. It must have been taken during WWII because my uncle is in his soldier’s uniform. But it was to be a while before I gave any thought to the medals pinned on the chest of my grandfather’s jacket.