Despite being a lover of the paper book and having a couple of shelves of research books, I have grown to appreciate the internet due to the sheer amount of information out there. It has enhanced not only my working life as a writer but my life in general. The other day wanting to discover more about the working lives of firstly the men without whom I wouldn’t be here, I Binged and Googled and hit upon a site called OLD MERSEY TIMES which consisted of transcripts taken from old newspapers.
www.old-merseytimes.co.uk

To my delight I discovered an extremely long and informative article taken from the LIVERPOOL MERCURY called “THE LIFE OF A DOCK LABOURER” written by a dock labourer during the 1800s. It provided me with information, not only about his working life but family life, religion, entertainment and even death, so much so that cynic that I am, I came to the conclusion that he was either a very educated dock labour or the by-line should have read -written from a dock labourer’s point of view. No doubt it is true that there were educated men who came to Liverpool who had fallen on hard times and sought work at the docks but on the whole most of the working classes of the times could scarcely read or write. Now while at various times some of my male forebears did work as dock labourers, I was really wanting to know more about the life of the carter. Fortunately I came across a couple of sites which provided me with information about carters and the working horses of Liverpool and with some great photographs.
https://www.google.co.uk/#q=Carters+and+the+working+horses+of+Liverpool 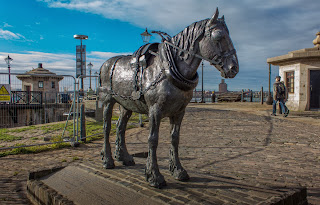 One of my nieces, Linda, born in Liverpool but living in Essex, would appreciate there being a monument to the working horses of Liverpool, near the Albert Dock, as she owns two horses and is a competitive rider.  The sculptor: Doreen Burns. The money for the monument was raised by Joe Hartley and other ex-carters on Merseyside.

I already knew something about carters because my mother-in-law used to talk about Tom the carter who loved his horses and how he used to prepare them for the Lord Mayor’s Mayday Parade by polishing horse  brasses and decorating mane and tail with ribbons and artificial flowers. Such information made its way into my novel THE PAWNBROKER’S NIECE, although that was set during the Depression.
Harness jingled, horses snorted and gaily-decorated carts, including the coalman’s and the Co-op’s, were being admired. People laughed and chattered. Despite the economy being in a mess and unemployment worse than ever with protests marches being organised, folk seemed determined to enjoy themselves today. Rita bought a yellow balloon because she had never had one as a child and also an ice-cream from a STOP ME AND BUY ONE vendor, pausing also to chat to several people she knew. She was looking for \Sam but there was no sign of him. Then she caught sight of Jimmy sitting astride a huge dappled gray horse, which exhibited a rosette.

Anyway, I learnt enough to give me some idea of not only my great-great grandfather James Harrison’s working life but have come to the conclusion that he could have worked at the Liverpool Cartage Company in Grafton Street, only a stone throw away from Mann Street.

But what about my great-grandfather mariner Martin Nelson, who married James and Maria Harrison’s daughter, Mary? There was no mention of him in any of the Liverpool censuses and it turned out that he couldn’t possibly be the Norwegian born mariner Martin Nelson listed as part of the crew on a ship in dock in the south of England. The birthdates were different so the latter proved to be a red herring. Mary seemed to have also disappeared so I decided to search for my grandfather, William Nelson.
In the 1891 census I discovered him living in Bootle, working as a dock labourer and citied as a stepson of Norwegian born mariner Henry Wilson, nationalised Brit.    Obviously my great-grandfather had died and the widowed Mary had remarried and also given birth to two more sons. I always think of Mary as a tough cookie. She had survived the fever ridden area that was Mann Street as a child, and given birth to at least six children who lived to adulthood. She married Henry in May, 1874 and they appeared to be living in Crown Street at the time, further away from the docks but near a rail depot and a station which in the 1830s had been the terminus for those travelling to Liverpool from Manchester; until a tunnel was bored through the rock to take the railway track to Lime Street. There was also a railway line that ran to the docks.
I doubt my grandfather, William, would remember his father as he was only a toddler when Martin died, most likely at sea sometime between 1872-3; his death does not appear to have been recorded. I have tried to trace where he originated from in Norway and have come to the following conclusion. There was a community of Scandinavians living in the Toxteth area, amongst them Nelsons and Wilsons. A Thomas Wilson was one of the witnesses at Martin and Mary’s wedding, so most likely he was a relative of the Henry Wilson, Mary's second husband, and who happened to be the same age as Martin.

I consider it possible that an Edward Nelson born in Arendal, Norway, who also lived in Toxteth was a relative of my great grandfather.He named his son, born in the 1870s, Martin, and it's not a common name.  So I consider it highly possible that my great-grandfather came from that part of Norway, too, as it had trading links with Britain and was famous for shipping, shipbuilding, timber and ironworks. I was tempted to download a photo of Arendal from one of several sites on the internet but feeling strongly about copyright, myself, in regards to my books, I respect that of the photographer. Instead here is a link  https://www.google.co.uk/#q=arendal+Norway

Here, instead is a picture of the cover of my next Liverpool based saga, set in the Fifties, which my publisher emailed to me two days ago. It will be out in hardback at the end of January 2014. 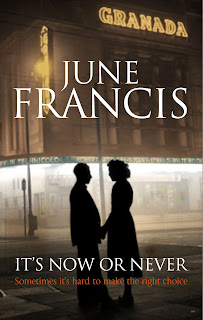 I hope to visit Arendal one day. As it is at the moment, my nephew, Garry Nelson, ex-professional footballer, has a close friend in Denmark. I met him at Garry’s wedding in Windsor this year and it’s possible that on Garry’s next visit to Denmark, the pair will hop across to Norway and visit  Arendal and see what they can find out. So it is possible that my nephew might beat me to it when it comes to finding out more about our Nelson ancestry.
Next time more about picture palaces as well as my Milburn ancestors.